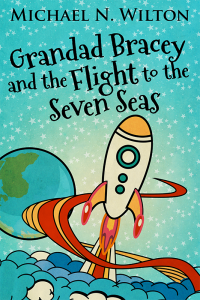 Staying with their beloved granddad, a retired merchant navy captain, after the unexpected death of their father in a car accident, 11 year-old Sally and her young brother Peter are shocked to learn that their mother, Mary, has decided to get married again to solve their money problems and to avoid being dependent on her father.

It soon becomes clear to Sally that her new stepfather, Ned, and his daughter, Mona, are not well off as her mother had fondly supposed, and when their mother is rushed to hospital with a mysterious illness, Mona plans to send the children away so that they can take over the house, leaving Granddad at their mercy.

Whilst teaching young Peter how to swing on his braces from the ceiling, Granddad Bracey makes a startling discovery that enables them to escape her clutches into the loft next door, and into a new world beyond their dreams.

Fumbling in the dark, Granddad unwittingly releases an ancient crony called Bridget MacHenny who has laid a curse on the house and all who live there. With the help of the ghostly appearance of his old shipmate, Charlie Piper, and urged on by Sally, he is faced with the stark decision of re-capturing the witch if they are to be free from her evil spell.

In the ensuing chase in Charlie’s spacecraft, it is left to Sally to help Charlie in hunting down the witch who has fled to a far off planet called Seven Seas. In a battle against time, her fighting spirit inspires the islanders to take up arms against the witch and her followers in a desperate battle to bring peace to the kingdom and save her mother’s life.