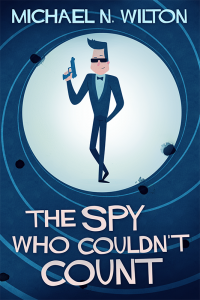 Inflicting Christian names like Jefferson Youll on a young lad already saddled with a surname like Patbottom is a sufficient handicap for anyone, but if you have the misfortune to be educated at somewhere like  Watlington County Grammar and end up as thick as a plank  and can’t even count, life gets very tricky indeed. Settling for Jyp and braving a succession of dead end jobs, he finds sanctuary in a Government statistics department dealing with figures, much to the hilarity of his father. To escape the amorous attentions of his ever helpful colleague, Jyp panics and dives into another office where he is recruited by one of Britain’s security departments after a hilarious interview in which he is mistaken for a trained spy killer. Despite his initial bumbling efforts, he takes on a fight to unmask a series of trusted spies in the heart of Whitehall in a desperate battle to win the hand of his true love.

Goodreads reviews for The Spy Who Couldn’t Count